This Is Where…
It All Began

Between the 1860s and the early 1900s, Harrison County supported several private hospitals that were short-lived, primarily because they existed at a time when most mothers had their deliveries in the home and surgical patients were sent to the hospitals in metropolitan areas. During this same time, the connotation of death was closely associated with hospitals, and if patients were hospitalized, it was for only one purpose–to die.

To make giving easy, we have three ways you may donate to the United Health Foundation. 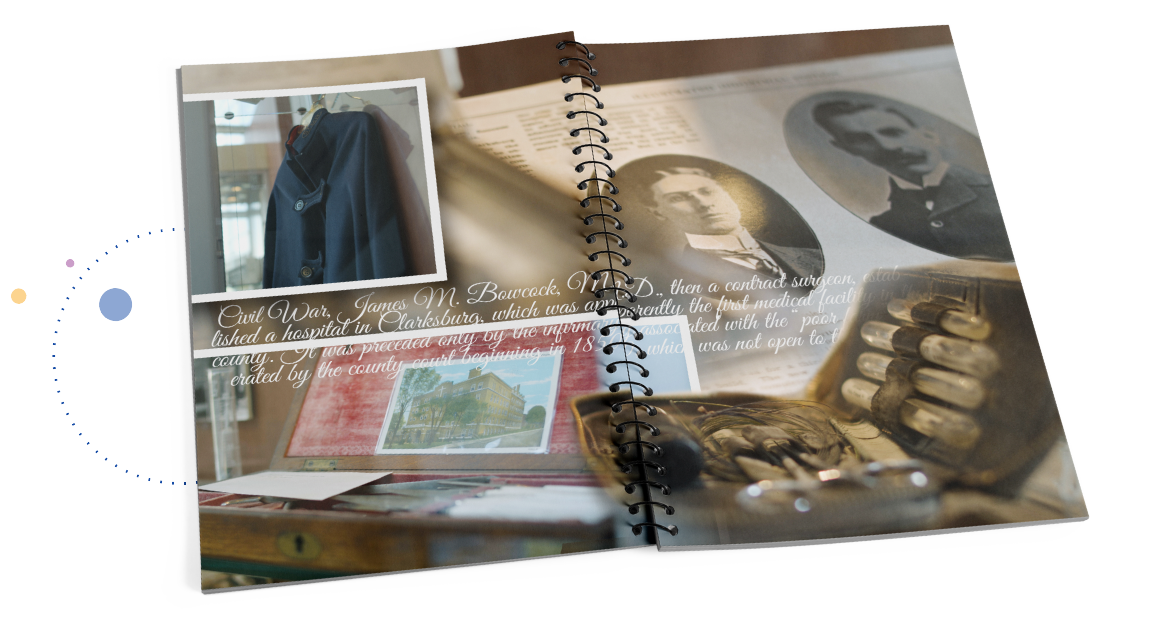 It is known that during the Civil War, James M. Bowcock, M.D., then a contract surgeon, established a hospital in Clarksburg, which was apparently the first medical facility in the county. It was preceded only by the infirmary associated with the "poor farm" operated by the county court beginning in 1850, which was not open to the general public.

Soon after he located in Big Isaac in 1899, Dr. Bennett I. Hudkins built a private hospital, but, unfortunately, it was washed away in a flood about 1916.

It was in March 1898 that Archibald K. Kessler, M.D., originally from Greenbrier County, WV, opened a hospital in Clarksburg on the corner of Water Street and Washington Avenue. This facility could accommodate twelve patients, and two years later a new wing was added to increase capacity to fifty beds. By 1902 it was enlarged again with accommodations for more than one hundred patients, and all the latest equipment including fire hose, electric lights, electric annunciators for instant communication, a modern elevator and an operating room "that contains every adjunct and appliance used in large city hospitals. 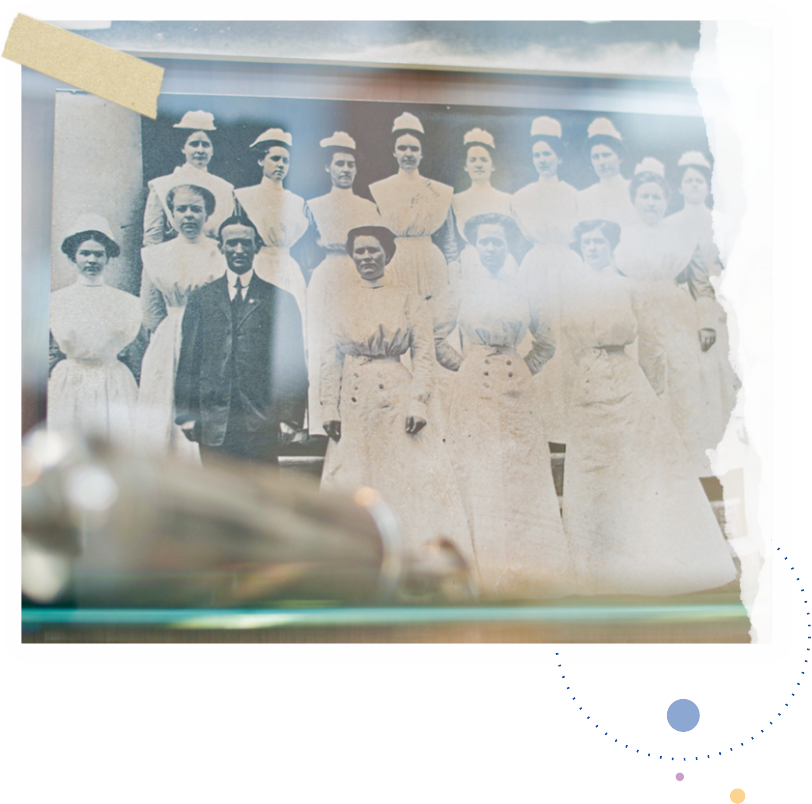 There was a two-year training school for nurses established in 1903 at Kessler Hospital, with a three-year program initiated at a later date.

U.M. Showalter, M.D., an obstetrician, was a member of the medical staff of Kessler hospital of Clarksburg from 1901 to 1905. In 1903, Dr. Showalter purchased property at the corner of Water and West Main Streets, in Clarksburg. This was the site of Clarksburg City Hospital, which opened about 1905 and had 22 beds. Dr. Showalter sold his interest in the hospital to Dr. John B. Payne who subsequently sold the property in 1908. At that time, the hospital was converted to a duplex.

From 1907 to 1911, Dr. Showalter operated a smaller hospital, known as Showalter Private Hospital, on Philippi Pike, in Clarksburg, and by 1911, he apparently abandoned this project and engaged in office practice.

Another small hospital, the Clarksburg Sanitarium, was chartered in June 1907. Situated on West Pike Street, it was later razed.

Apparently Dr. Bowcock did not continue to operate his hospital for any length of time after the Civil War, because a special edition of the Harrison County Herald issued in 1902 indicates that, prior to March 1898, Clarksburg was without an institution for the care of the sick, where could be obtained medical and surgical attention…

In June 1903, a group of individuals including Selma Mason, M.D., of Virginia, purchased Kessler Hospital. Dr. Mason obtained sole ownership in 1914 and began plans for a new hospital.

On November 18, 1915, a charter was issued to the Mason Hospital Company. The company purchased the property adjacent to the Kessler Hospital, and by May 1916, plans were approved for a new hospital. Mason Hospital was ready for occupancy in November 1917. 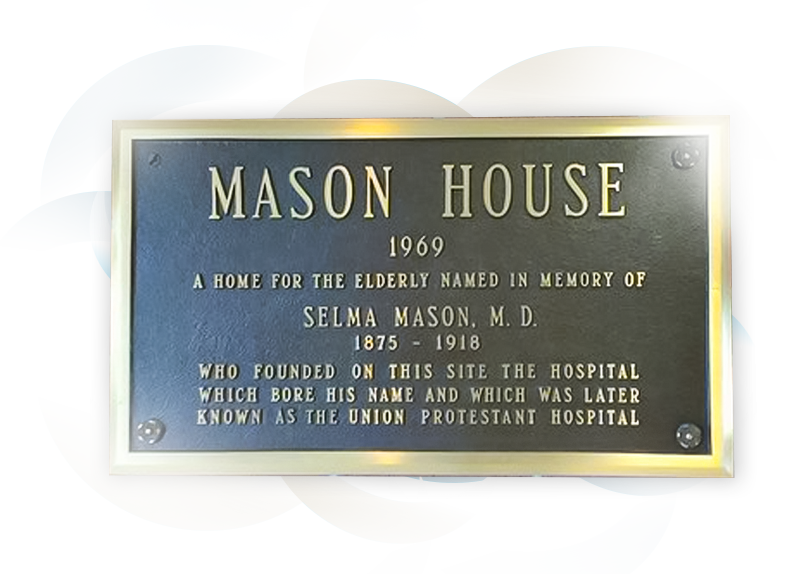 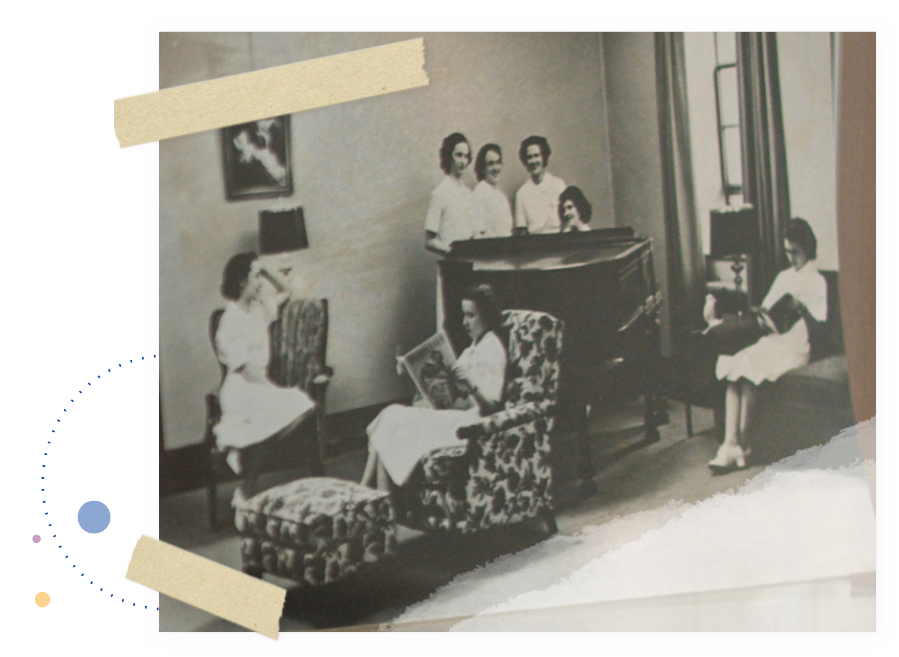 Dr. Mason lived for less than a year after the new hospital was opened, as he met an untimely death during an influenza epidemic that swept through the county. Subsequently, a group of local physicians purchased shares of stock of the Mason Hospital Company from the Mason heirs.

A new nursing program for Mason Hospital was instituted in 1917. During the next year students were boarded in part of the former Kessler Hospital building, and in 1919, the Board of Directors of Mason Hospital purchased property across the street from the hospital to serve as nurses’ quarters.

The training program continued to function at Union Protestant Hospital School of Nursing from 1933 until August 31, 1955, when the last class graduated.

During the 42 years of operation as Kessler-Mason-Union Protestant nursing schools, 267 students received diplomas.

Mason Hospital was renovated during 1928 by enclosing two open porches to provide four additional rooms; a fourth-floor diet kitchen was converted to a delivery room and a telephone switchboard was installed in the office. The Mason Hospital had a capacity for 60 beds and 18 bassinets and it continued to function under that name until December 1933, when it reincorporated as a nonprofit institution: Union Protestant Hospital.

In 1955, it became the first Methodist-sponsored hospital in the state. Three years later, the board of directors of Union Protestant Hospital purchased land on the southern border of Clarksburg, employed architects to design a new hospital, and held groundbreaking ceremonies on November 2, 1958.

The Union Protestant Hospital on Washington Avenue in downtown Clarksburg was razed in 1968. 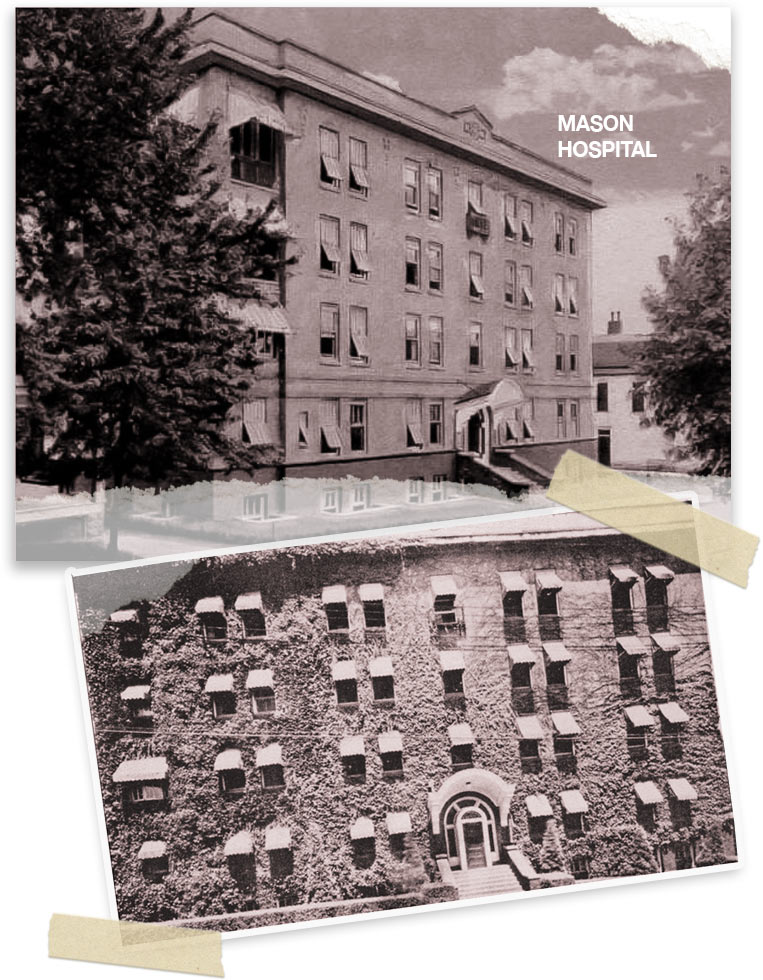 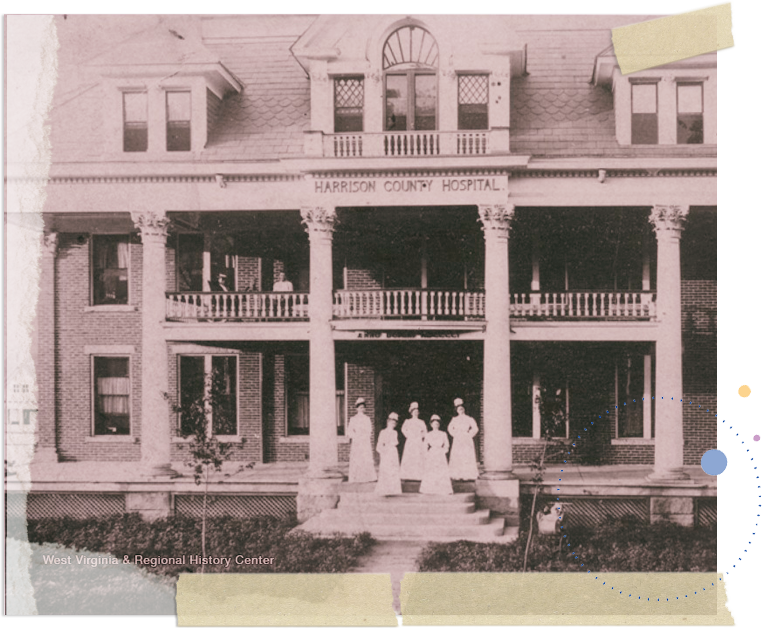 The original portion, the Harrison County Hospital, was dismantled during 1940 and 1941 to make way for the new east wing addition, which brought the bed capacity to 205, plus thirty-nine bassinets.

In 1900, Harrison County Hospital was incorporated and built two years after the establishment of Kessler Hospital. The facility was located on Washington Avenue, between Chestnut and Sixth Streets, and it was organized by a company of physicians and local citizens. Ground was broken in June 1901 and the hospital was ready for occupancy in May 1902. It was a three-floor, fifty-bed, brick structure with steam heat, electric lights, an elevator, and electric bells for patients to call hospital attendants to their bedside. In connection with the hospital was a training school for nurses, which awarded diplomas. The hospital offered ambulance service (horse-drawn ambulance) when requested and rooms ranged for $15 to $30 per week, depending on services rendered. It also had a "board of lady visitors", whose purpose was similar to the present hospital auxiliary.

The Harrison County Hospital, which had been staffed by the Sisters of St. Joseph of Wheeling since 1903, was operated until 1905, when it encountered financial difficulty. It was purchased by the Sisters in that year and was rechartered with the name St. Mary’s Hospital. An annex was added to the hospital in 1908, and two years later the pavilion was constructed, followed by the addition of the west wing in 1937. The original portion, the Harrison County Hospital, was dismantled during 1940 and 1941 to make way for the new east wing addition, which brought the bed capacity to 205, plus thirty-nine bassinets.

The St. Mary’s Hospital School of Nursing was chartered in 1905 and was maintained until 1968. In 1948, DeSales hall, a modern six-story brick building, was constructed on Main Street adjacent to the hospital to provide housing and educational facilities for one hundred student nurses. It was named in memory of Sister Mary de Sales Coraty, who had served as administrator of St. Mary’s Hospital for 22 years.

Sister Mary Ruth Owen said, “ St. Mary’s School of Nursing was the first in West Virginia to receive full accreditation by the National League for Nursing Education," and it was also accredited by the West Virginia State Board of Examiners for Registered Nurses. The commencement exercises held May 29, 1969, marked the close of 63 years of operation, during which time a total of 976 students graduated. 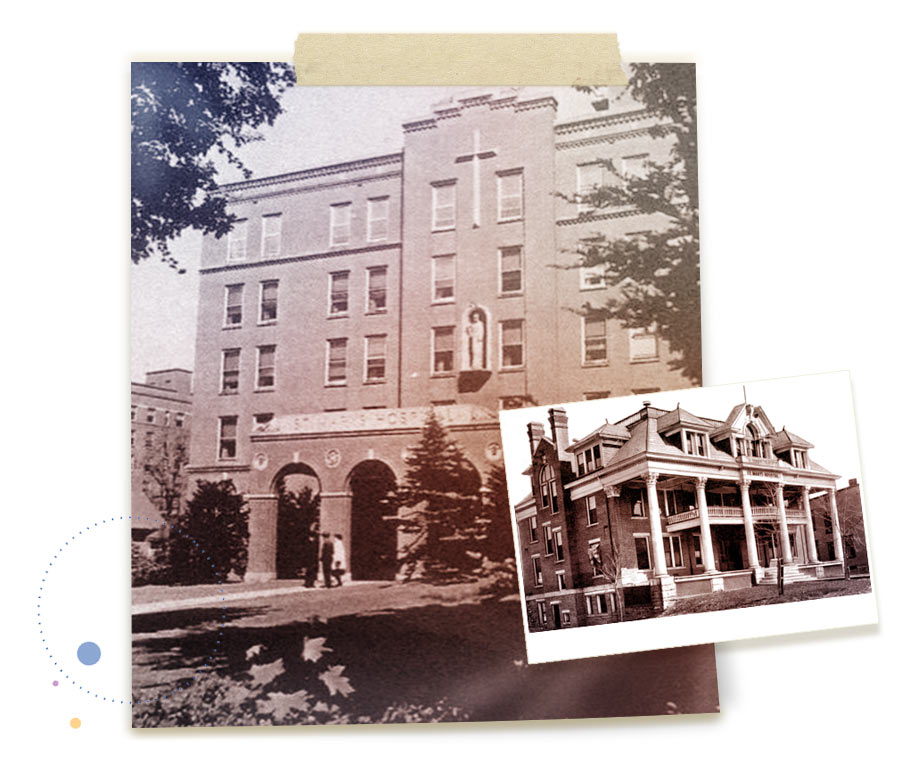 According to Sister Mary Ruth Owen, "St. Mary’s School of Nursing was the first in West Virginia to receive full accreditation by the National League for Nursing Education," 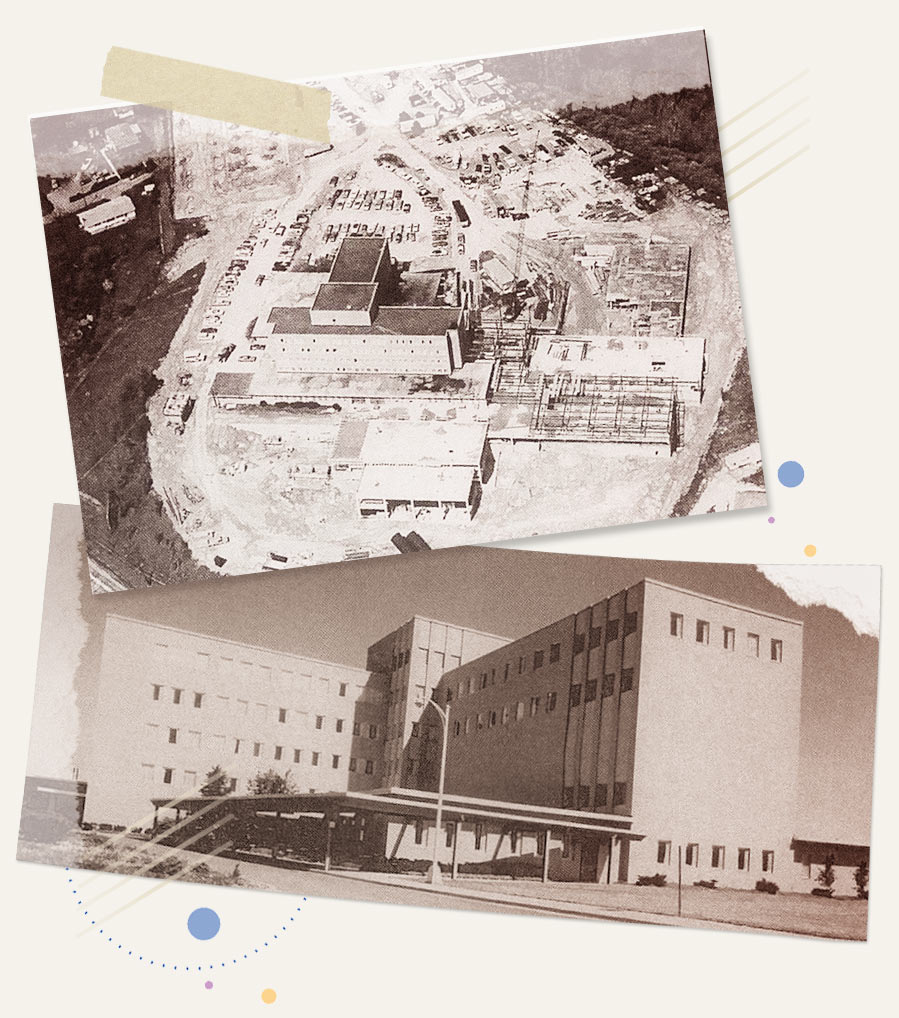 It became apparent about 1965 that St. Mary’s Hospital physical plant needed to be replaced with a modern healthcare facility, and the Sisters of St. Joseph decided to construct a new hospital on the site of St. Mary’s. Plans were thwarted when sufficient adjoining property was unobtainable.

In November 1969, the Harrison County Medical Society passed a resolution in favor of the merger of Union Protestant and St. Mary’s hospitals. St. Mary’s had planned to renovate or build, and Union Protestant Hospital had reached a point of saturation and expansion was a consideration for them.

The merger was completed in 1970, with the new organization granted a charter under the name of United Hospital Center. St. Mary’s Hospital became the Downtown Division.

As time progressed, it was decided to locate United Hospital Center on the grounds adjacent to the former Union Protestant Hospital. Construction began in 1974, and December 29 and 30, 1976 were designated "moving days" for the patients from Downtown Division. In January 1977, the properties of Downtown Division and DeSales Hall were sold to Empire National Bank, Clarksburg.

The new UHC opened in 2010 and is located along Interstate 79 in Bridgeport. The 690,999-square-foot structure rises eight stories. It is designed around the environment with the patient, family, staff, and community in mind – which includes enhanced patient privacy, a high level of technology integration and improved access to care.

The acute care facility has 292 private inpatient rooms with a medical staff that consist of more than 381 primary care and specialty physicians. UHC employs more than 2,700 associates and is a member of WVU Medicine.